Two of my poems, titled “To Late Night Apprehensions” and “The Evolution of Enormity” are live on decomP magazinE’s website. These two poems appeared in decomP’s March/April 2018 issue, which also happens to be their fourteenth-anniversary issue. Check out these poems (and their audio recorded readings) here. 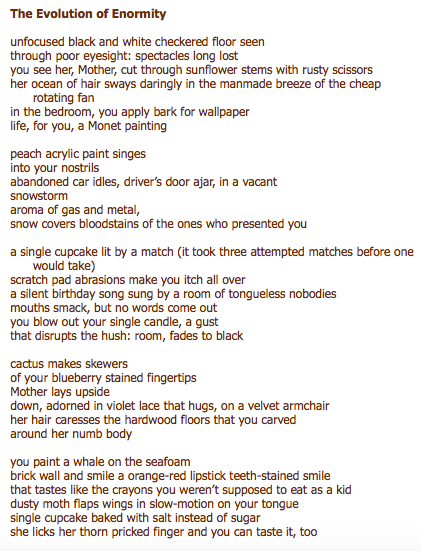 Savannah Slone is a queer writer who earned her B.A. in English: Professional and Creative Writing from Central Washington University and is completing her M.F.A. in Writing at Lindenwood University. Her poetry and short fiction has appeared in or will soon appear in Manastash Literary Arts Magazine, Creative Colloquy, Heavy Feather Review, Boston Accent Lit, PaperFox Lit Mag, The Stray Branch, and The Airgonaut. Savannah lives in Skykomish, WA, where she works a handful of part-time jobs and cares for her toddler with autism. She enjoys reading, writing, knitting, and hiking. She is passionate about women's rights and social justice for all. View all posts by savannahslonewriter